Out of all the events that are happening on a Saturday night in New York City, we were thrilled and honored that for our January 2019 New York debut we were recommended in The New York Times as something that is “Coming Up”. You’ll need a Times account to read the full article, and you can see below our small, yet in our hearts, large appearance! 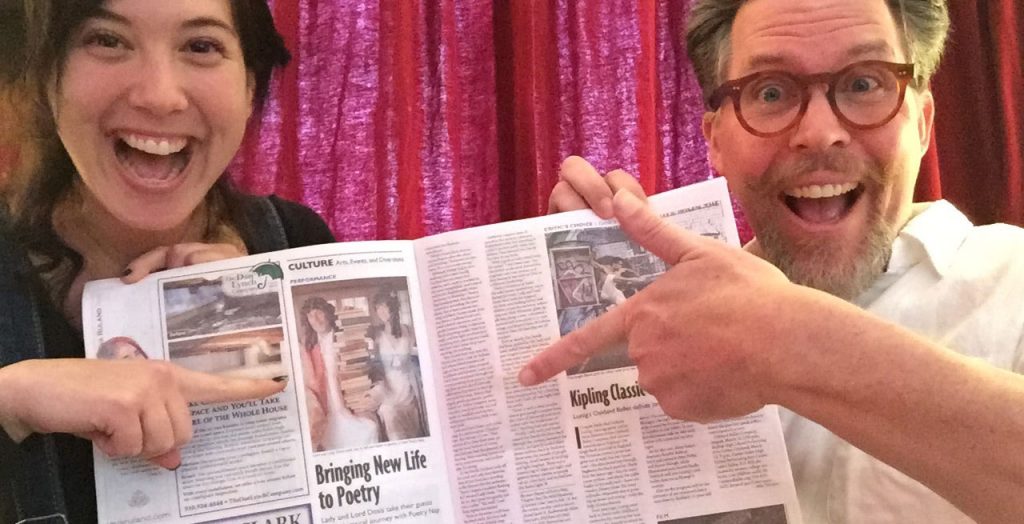 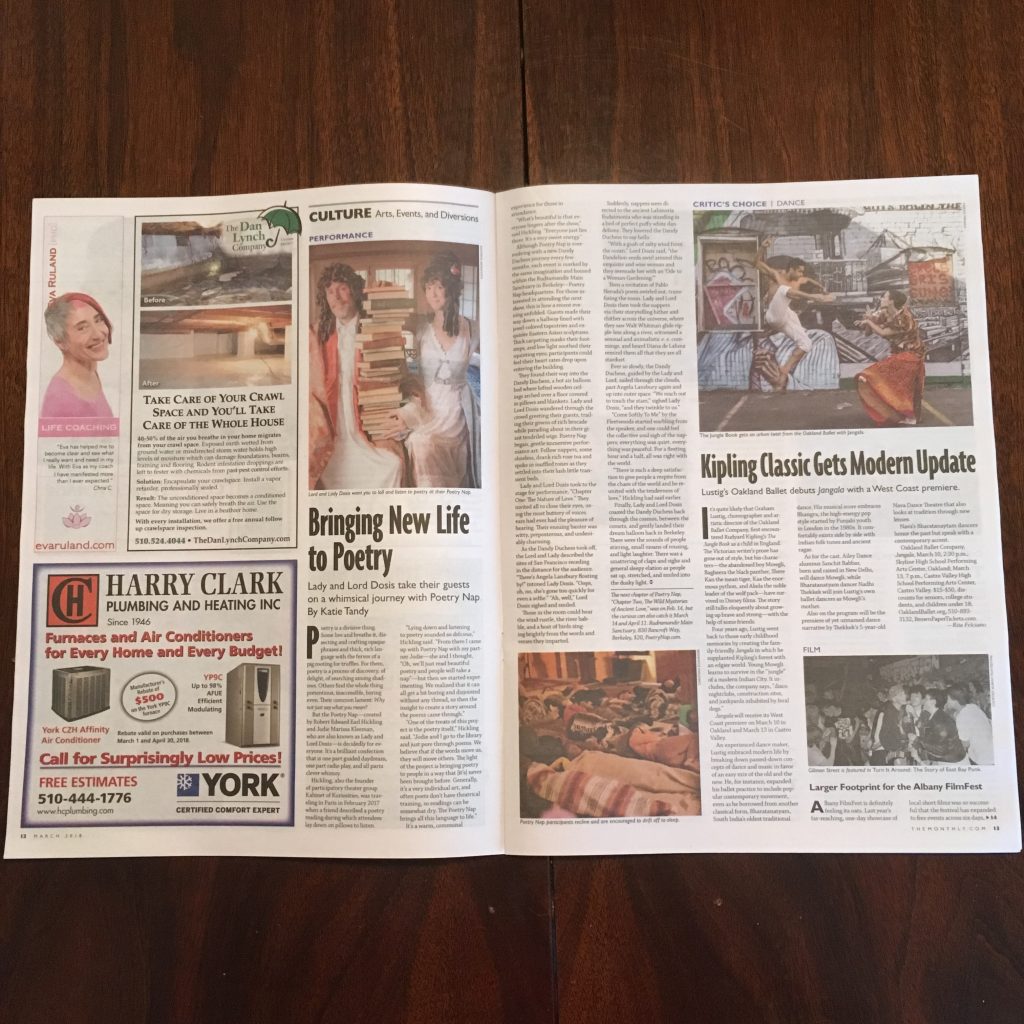 March 2018 edition of The East Bay Montly features a wonderful article by Katie Tandy about Poetry Nap. We are thrilled and grateful! Full text below.

Lady and Lord Dosis take their guests on a whimsical journey with Poetry Nap.
By Katie Tandy

Poetry is a divisive thing. Some live and breathe it, dissecting and crafting opaque phrases and thick, rich language with the fervor of a pig rooting for truffles. For them, poetry is a process of discovery, of delight, of searching among shadows. Others find the whole thing pretentious, inaccessible, boring even. Their common lament: Why not just say what you mean?

But the Poetry Nap—created by Robert Edward Earl Hickling and Jodie Marissa Kleeman, who are also known as Lady and Lord Dosis—is decidedly for everyone. It’s a brilliant confection that is one part guided daydream, one part radio play, and all parts clever whimsy.

Hickling, also the founder of participatory theater group Kabinet of Kuriosities, was traveling in Paris in February 2017 when a friend described a poetry reading during which attendees lay down on pillows to listen.

“Lying down and listening to poetry sounded so delicious,” Hickling said. “From there I came up with Poetry Nap with my partner Jodie—she and I thought, “Oh, we’ll just read beautiful poetry and people will take a nap”—but then we started experimenting. We realized that it can all get a bit boring and disjointed without any thread, so then the insight to create a story around the poems came through.”

“One of the treats of this project is the poetry itself,” Hickling said. “Jodie and I go to the library and just pore through poems. We believe that if the words move us, they will move others. The light of the project is bringing poetry to people in a way that [it’s] never been brought before. Generally, it’s a very individual art, and often poets don’t have theatrical training, so readings can be somewhat dry. The Poetry Nap brings all this language to life.”

It’s a warm, communal experience for those in attendance.

“What’s beautiful is that everyone lingers after the show,” said Hickling. “Everyone just lies there. It’s a very sweet energy.”

Although Poetry Nap is ever-evolving with a new Dandy Duchess journey every few months, each event is marked by the same imagination and housed within the Rudramandir Main Sanctuary in Berkeley—Poetry Nap headquarters. For those interested in attending the next show, this is how a recent evening unfolded. Guests made their way down a hallway lined with jewel-colored tapestries and exquisite Eastern Asian sculptures. Thick carpeting masks their footsteps, and low light soothed their squinting eyes; participants could feel their heart rates drop upon entering the building.

They found their way into the Dandy Duchess, a hot air balloon bed where lofted wooden ceilings arched over a floor covered in pillows and blankets. Lady and Lord Dosis wandered through the crowd greeting their guests, trailing their gowns of rich brocade while parading about in their giant tendriled wigs. Poetry Nap began, gentle immersive performance art: Fellow nappers, some shoeless, drank rich rose tea and spoke in muffled tones as they settled into their lush little transient beds.

Lady and Lord Dosis took to the stage for performance, “Chapter One: The Nature of Love.” They invited all to close their eyes, using the most buttery of voices ears had ever had the pleasure of hearing. Their ensuing banter was witty, preposterous, and undeniably charming.

As the Dandy Duchess took off, the Lord and Lady described the sites of San Francisco receding in the distance for the audience. “There’s Angela Lansbury floating by!” intoned Lady Dosis. “Oops, oh, no, she’s gone too quickly for even a selfie.” “Ah, well,” Lord Dosis sighed and smiled.

Those in the room could hear the wind rustle, the river babble, and a host of birds singing brightly from the words and verses they imparted.

Suddenly, nappers were directed to the ancient Lahinoria Eudaimonia who was standing in a bed of perfect puffy white dandelions. They lowered the Dandy Duchess to say hello.

“With a gush of salty wind from the ocean,” Lord Dosis said, “the Dandelion seeds swirl around this exquisite and wise woman and they serenade her with an ‘Ode to a Woman Gardening.'”

Then a recitation of Pablo Neruda’s poem swirled out, transfixing the room. Lady and Lord Dosis then took the nappers via their storytelling hither and thither across the universe, where they saw Walt Whitman glide ripple-less along a river, witnessed a sensual and animalistic e. e. cummings, and heard Diana de Laluna remind them all that they are all stardust.

Ever so slowly, the Dandy Duchess, guided by the Lady and Lord, sailed through the clouds, past Angela Lansbury again and up into outer space. “We reach out to touch the stars,” sighed Lady Dosis, “and they twinkle to us.”

“Come Softly To Me” by the Fleetwoods started warbling from the speaker, and one could feel the collective soul sigh of the nappers; everything was quiet, everything was peaceful. For a fleeting hour and a half, all was right with the world.

“There is such a deep satisfaction to give people a respite from the chaos of the world and be reunited with the tenderness of love,” Hickling had said earlier.

Finally, Lady and Lord Dosis coaxed the Dandy Duchess back through the cosmos, between the comets, and gently landed their dream balloon back in Berkeley. There were the sounds of people stirring, small moans of rousing, and light laughter. There was a smattering of claps and sighs and general sleepy elation as people sat up, stretched, and smiled into the dusky light. 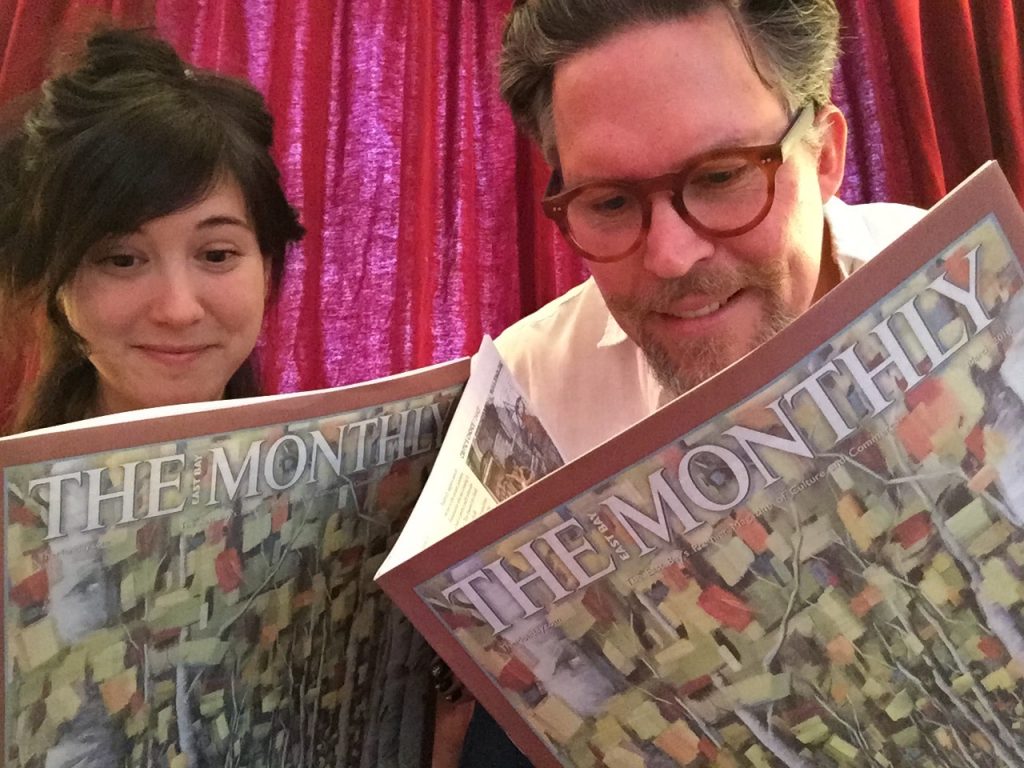